I had originally picked out a white-on-black spot for my binding, but after choosing the printed backing, rather than the pieced back with solids I was planning, it was all a bit too busy. Instead I went with a solid black binding to frame the quilt. There’s no way I could have settled on a single colour and I think the binding also ties in the bits of black from the backing. 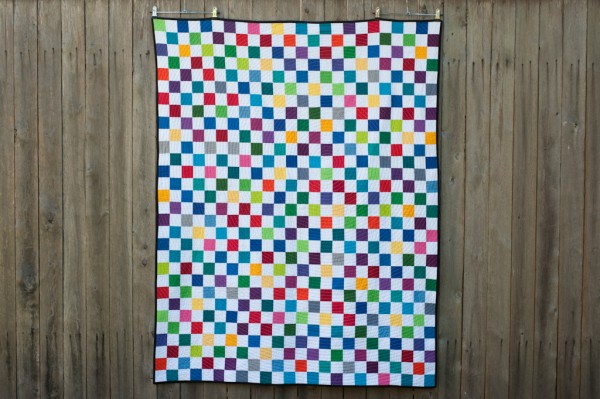 I’m so happy with how the spiral quilting turned out. The free motion part in the middle is a bit wonky, but that just adds character, right? 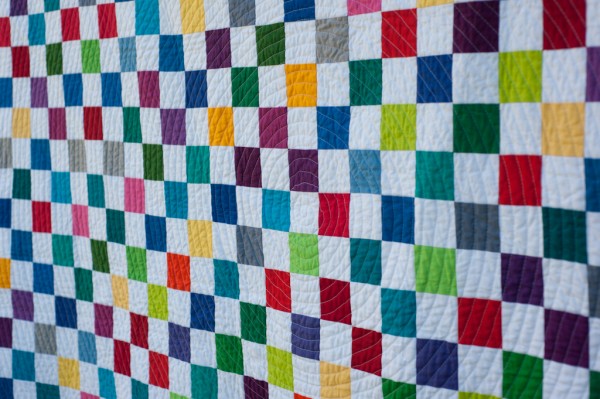 The print on the back has worked so well in balancing the front, the circles and squares are a great contrast and while the colours are all brights I found the top seemed to be more cool colours, where as the back is beautiful and warm. 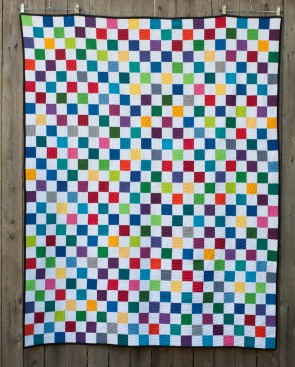 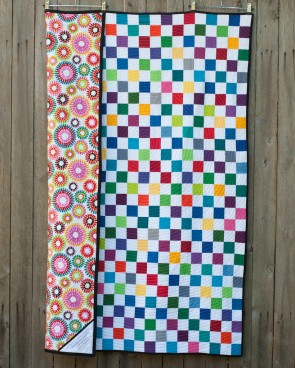 I also decided to hand embroider the label for this quilt. I just couldn’t find a great pen/marker/printing solution that looked like it would work and remain legible through a (hopefully) long life. I was reading a lot of blog posts about labeling quilts and checking out different labels on Flickr so decided I wanted to make this a good one and spent that bit of extra time creating my label. 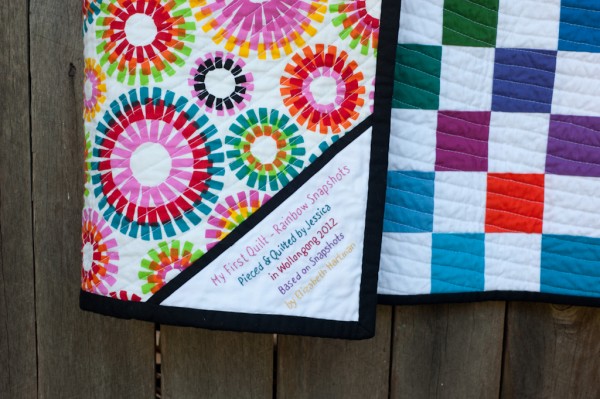 So there you have it, my first quilt, finished by the end of the year which was my goal. If you missed in one of the earlier posts, this quilt is based on Snapshots by Elizabeth Hartman from her book The Practical Guide to Patchwork: New Basics for the Modern Quiltmaker.

I’ve made a small baby quilt since, and have also started on my next bigger quilt project. 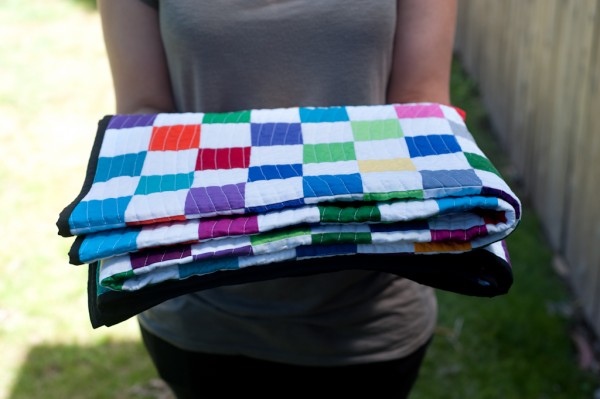 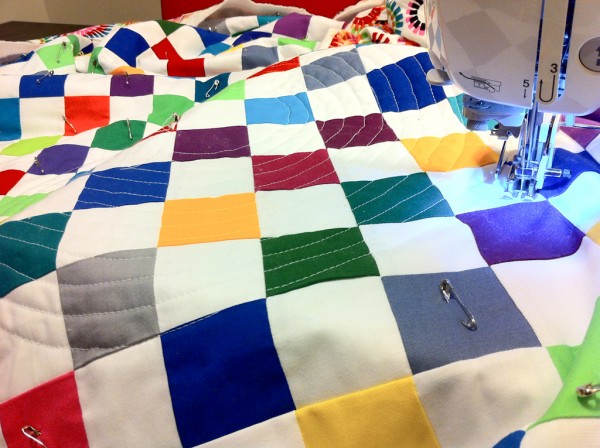 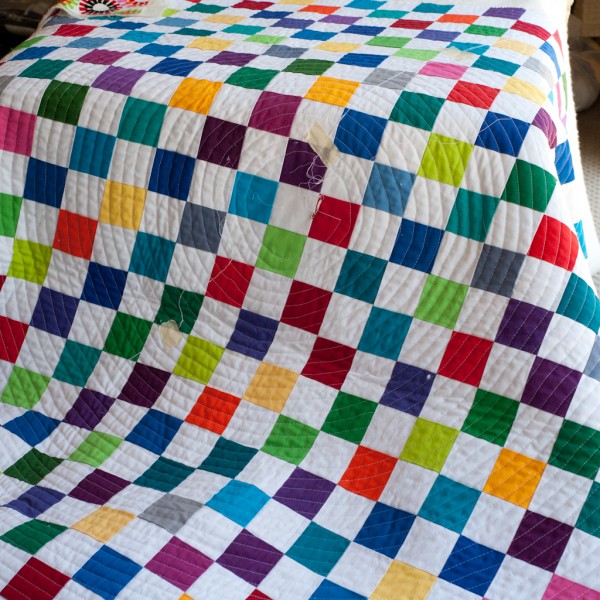 Despite a lack of updates here, my quilt has actually progressed quite well. It’s *this* close to being finished which means I’m on track to meet my goal of “finish a quilt this year”. Really aimed high with that one didn’t I? In January it seemed achievable for a first timer and I can definitely say that were it not for the Wollongong Modern Quilt Guild and all the lovely ladies & our visitors at our monthly sew days who have given advice and encouragement, I may not have got this far.

So, time for a bit of catchup…

I picked up a stunning print from Kelani Fabric at the Sydney Craft & Quilt Fair. It’s called Fiesta Firecracker, from the Folklorica collection by Alexander Henry. I thought it would work well as it took similar bright colours from the front but used concentric circles which would mimic the quilting that I was planning. It also helped that it was a nice busy print on a white base so my rookie quilting wouldn’t show too much.

Back at our July Sew Day (yes that long ago) I took along my finished quilt top, the batting, and my backing fabric to prepare my quilt sandwich. I needed to join the backing first to make it wide enough (those long seams are scary!). When that was all ready I got some help from Rachael to tape it out taut on the floor and then we smoothed the batting out on top. Amy, of badskirt fame, helped with clever ideas for getting my top centred and then we pinned… and pinned some more. Huge thanks go out to Rachael, Diane & Jo who helped with the pinning, and came to the rescue with extra pins. 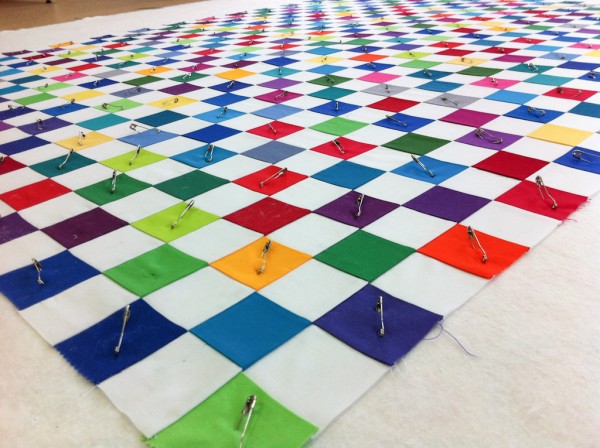 One delicious sandwich all ready for quilting.

Just a quick finish to share from earlier this month, a sashiko sampler panel. I bought 3 of these panels and the slightly less traditional variegated thread at the Sydney Craft & Sewing Show after taking a workshop with Indigo Niche which resulted in a finished scissor pouch. 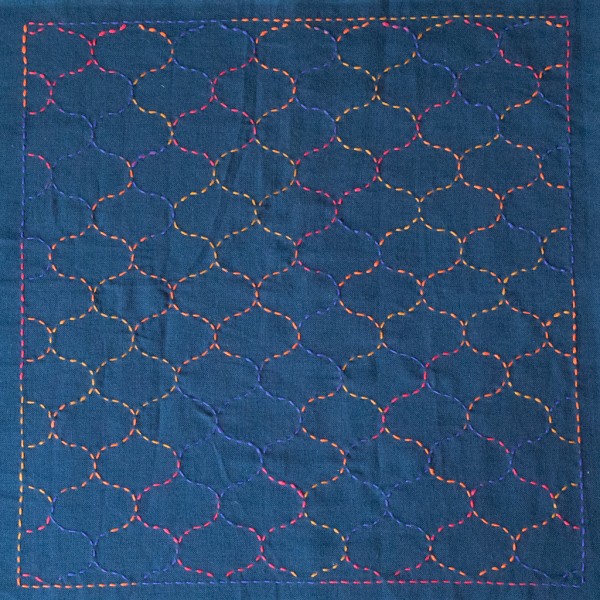 These panels are great little travelling projects. Most of this one was completed while out and about at bike races. I had the panel folded, the thread, a needle and a small pair of scissors all inside a little pouch that went out with me all the time.

I haven’t decided exactly what this will become but I’m counting the panel as a finish for now.

Now that spring has sprung and we’ve had the occasional day of warm weather I’ve finally had the chance to wear my wrap skirt again.

The fabrics are from the Aviary 2 line in Granite by Joel Dewberry. The main skirt panels are Sparrows in Cavern, and the hems & ties use Damask in Granite. Not my usual colours (the yellow) so I would have looked straight past it without help from the Kelani Fabric stall at the Quilt and Craft Fair last year. The skirt pattern is The Versatile Wrap by Toni of Make It Perfect, who was also kind enough to offer advice on using a one directional print. She’s also made a skirt using Aviary 2 Sparrows in Mustard. 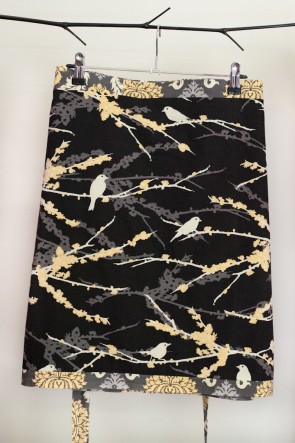 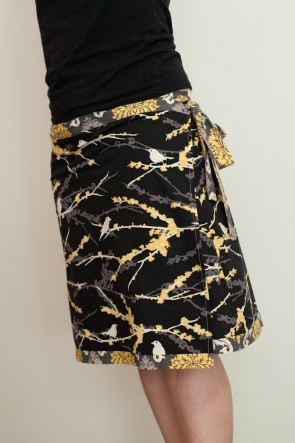 Through most of high school I pretty much refused to wear skirts and dresses, I’ve been slowly coming around ever since. It helps that this wrap skirt is too easy to make and really comfy to wear, it works with tights and boots when it’s cool to.

Now that I have the pattern pieces cut it should only take me a couple of hours to whip up this years version, I have some gorgeous Saffron Craig fabric ready to do just that.